This episode is sponsored by Digimarc.

Tobacco industry executive Hernan Albamonte takes us through the 2020 “Guerra Contraband Cigarettes” case – the largest seizure of tobacco products in U.S. history. Here he introduces us to a unique brand protection challenge, that of “illicit “whites” which are cigarettes that have no branding or are off-branded. Hernan also addresses other complications in enforcement caused by loopholes and the unintended issues with free trade zones; and finally Hernan answers why we should care about tobacco, speaking to the underground criminal networks that use high demand products as illegal currency to fund their operations.

Hernan Albamonte is the Head of Illicit Trade Prevention for Philip Morris International (PMI), based in Washington D.C. Albamonte has served in various PMI roles around the globe for over fourteen years.

As PMI’s Head of Illicit Trade Prevention U.S., Albamonte is charged with coordinating the company’s campaign to combat illicit trade including, training law enforcement officers across the country so illicit products can be easily spotted and removed from underground networks, cultivating and briefing the government authorities on PMI’s core initiatives and representing the company with a variety of audiences and stakeholders.

Before transitioning to the company’s D.C. office in 2019, Albamonte served as PMI’s Global Government Affairs Manager in Lausanne, Switzerland. In that role, he developed a network of alliances with third party stakeholders and executed government affairs and media engagement campaigns for the Europe, Latin America, Middle East and Africa markets.

In 2013, Albamonte was stationed in Costa Rica as PMI’s Corporate Affairs Manager of Central America. He expanded the region’s public-private partnerships with local and international law enforcement agents, resulting in the seizures of over $36 million of unlicensed products and the closure of five illicit enterprises. Additionally, Albamonte generated a cross-industry anti-illicit trade web app sponsored by Chambers of Commerce and Ministries of Finance in three Central American countries.

Furthermore, Albamonte orchestrated anti-illicit trade operations in Mexico, Guatemala, Belize and the United States as PMI’s Latin America Regional Intelligence Coordinator in 2011, based in Mexico City. In addition to recovering $42 million of illicit goods by deploying anti-black market commercial strategies, Albamonte and his team successfully dismantled an illegal-export border route of unlicensed products through a partnership with PMI’s US and Mexico public and private stakeholders.

He began his career with PMI in 2007 as a Communications Intern in his native country of Argentina, and was quickly elevated to the role of Brand Integrity Coordinator, where he launched communications campaigns to raise awareness about illicit trade in Argentina, Brazil, Bolivia, Chile, Paraguay and Uruguay.

He lives in the D.C. area with his wife Carina, a pediatric neuropsychologist and author, and their three children. 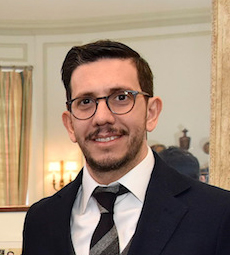